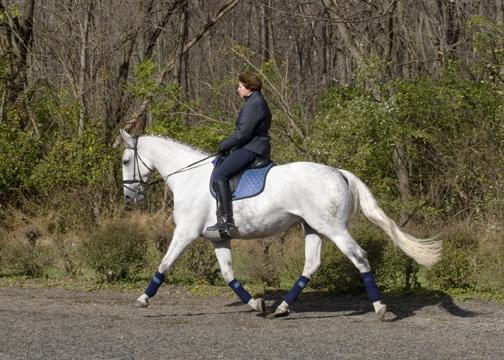 The photo of the grey mare shows a horse who had hooves like steel and could actually perform barefoot. She was born and raised in one of the most awful environments for horses’ feet—Berks county, southeastern Pennsylvania, and she never wore shoes.  Once, I had expensive Epona shoes nailed and glued onto her feet, and within a day, she kicked them off.  Most every horse in southeastern Pennsylvania has chronic thrush and white line disease as a result of the continual rainfall, soft ground, and invasion of nail-damaged feet by the soil bacteria and fungal pathogens, a diet of the lush green sugar rich grass which grows in the area, and a diet of more sugar rich sweet feed, all of which can cause metabolic syndrome and the excess insulin reactions similar to the vasculitis and subsequent decay of tissue in the feet, hands, and nails of human diabetics.   The Hanoverian mare pictured above, whose name is Amantillada, came from lines of good footed horses.  In spite of the terrarium like conditions in this Mid Atlantic state, Amantillada’s feet stayed healthy and sound for the 9 years she was with me.  She is a rarity. 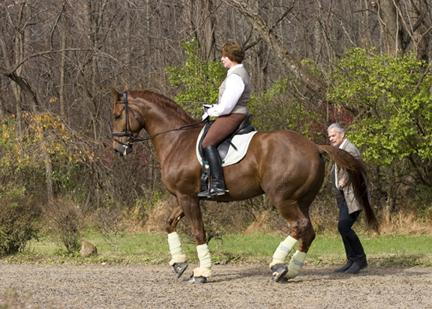 The next photo shows a Westfalen gelding which is extremely beautiful and talented, and has genetically worthless, soft feet which can’t even support the horse’s own weight.  Horse shoes and the southeastern Pennsylvania climate have literally destroyed this horse’s feet.  Here, he is shown in October, 2006 with his feet wrapped in socks, covered by lambs’ skin, inside Hoofwings horse boots.  No need for NSAIDS.  He simply needed padded protection of his hooves. Eventually, I got his feet to grow out sound enough to show him barefoot at a prominent horse park.  While there, he stepped on a stone and put it right through the bottom of his sole into the live corium, which set him up for another sub solar abscess.  He can’t be shown barefoot.  His feet are too soft.  He can’t have nail put into his foot.  Nails cause the feet to become infected with white line disease.  He can’t have shoes glued on.  The glue eats his feet away.  The glue also stops the flexion of the caudal part of his foot, ties in the heels to the shoe, and makes the heels totally contract.

Below is a photo of what a glued on shoe did to Fabio’s foot: 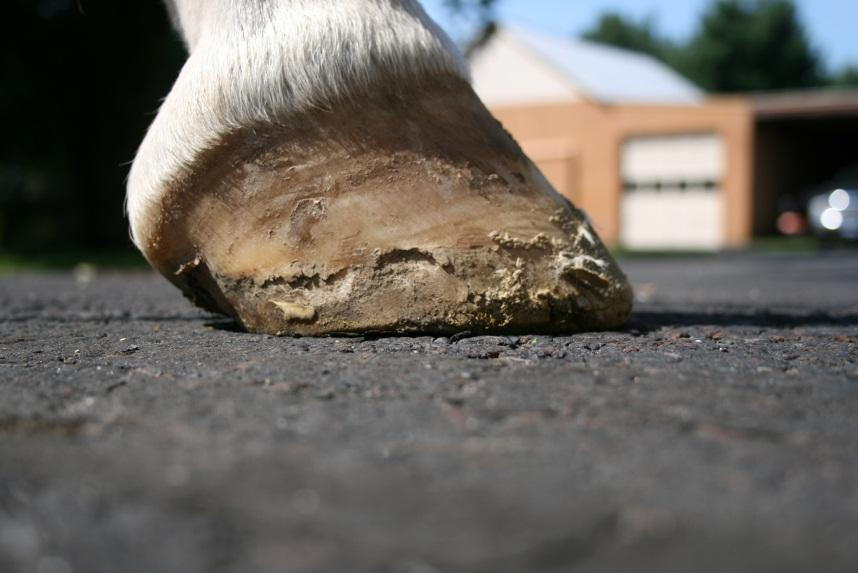