The argument, as presented in Parts I,II,and III, is that horses should be allowed to compete in dressage, in removable, light, hoofboots such as Easyboot Gloves, because some horses cannot tolerate nailed on or glued on metal or composite shoes.  The reason, due to environment and genetics, is because some otherwise very talented horses, have poor quality hoof walls which have been compromised by nails or glue and metal shoes.  Once the hoof wall, sole, and frog of a foot have been damaged, rest assured that the soft structures inside of the hoof wall have been damaged as well, either by infection, which has entered into the foot through nail holes, detached walls, or thrush laden frogs, or by destruction of the blood supply within the foot due to compression of the blood vessels and other soft tissue structures by the constant pressure from horse shoes which by nature of their compression onto the periphery of the foot, cause continual and unrelenting pressure on the external and internal components of the foot.

We all know that pressure and release is good for the circulation and for the health of bone and muscles, and tendons.  Massage is an example of pressure and release.  Constant pressure, however, causes tissue necrosis or destruction. An example of constant pressure is a tight fitting shoe on your own foot.  Even a wad of soft cotton placed under your arch in a shoe may cause comfort at first, but eventually will be a source of constant pressure as uncomfortable as a rock under your arch in a shoe.  Another example of constant pressure is a rubber band around your finger (or a bull’s testicles).  We all know that if the rubber band is left there long enough, the constant constriction by the band will cut off the circulation to the end of the finger (tourniquet) cutting through your skin, and at the same time, the lack of blood supply to the end of your finger (or a bull’s testicles) will amputate the finger (or castrate the bull).  It is a proven fact that steel horseshoes nailed onto a horse’s foot will cause reduction in the circulation within the foot.  Sometimes it can even cause complete cessation of circulation to certain parts of the foot.

We all learn in our horse husbandry classes, that huge horses have very poor return of circulation from their feet back to their heart.  There Is practically no muscle from the horse’s foot to its knee or hock, which can cause the pressure and release on blood vessels and the pliable tissues within the foot in order to generate a hydraulic mechanism to draw or push the blood from the feet, up to the heart of the horse.  We all learned that it is the motion of the horse which helps the blood get out of the feet and legs and back to the heart.  Well, it is the motion of the horse coupled with healthy, uncompromised blood supply and soft tissue cushions around ligaments and tendons and bones all within the hoof which is made by nature to be able to expand and contract.  The expansion and contraction of tissues within the hoof wall (pressure and release) are enabled and influenced by the degree to which the hoof capsule can expand and contract with every footfall.  A hoof wall held rigid and compressed by nailed on steel cannot expand and contract very well.  Some glued on shoes are often even worse for the foot because they can tie the heels of the foot rigidly to the shoe, thereby eliminating even more expansion and contraction of the hoof.

Tied in heels result in a disused frog which atrophies.  The atrophied frog leads to disused digital cushions which atrophy.  Atrophied digital cushions lead to less protective cushioning, and biomechanical effects of the coffin bone-pastern bone joint, the navicular bone and its joints and bursae, the deep flexor tendons which attach to the navicular bone and coffin bone and pastern bones and around the navicular bone.  And even more importantly, the compression caused to the solar corium (flesh, blood vessels, horn producing cells for the sole, which are all right under the sole) by the continual pressure from the shoes, damages the circulation to all the tissues within the foot, causing generalized inflammation, necrosis, with sterile or infectious abscessation within the hoof.  In time, Nature’s perfect biomechanically efficient organ for locomotion in a large prey animal has been destroyed by the horse shoes meant by man to protect it.
So, horseshoes ultimately destroy the feet of even genetically tough hooved horses in optimal environmental conditions (dry—like the western plains of the USA).

Why, in knowing all the above, would a thinking horseperson who adores his/her horse even want to think about putting a nailed on or glued on horseshoe on his/her beloved partner?  Tradition?  Rules of sport?  When you think about it, those reasons are really stupid, aren’t they?

We all agree that most performance horses today need some type of hoof and foot protection.  Most of equine professionals admit that long term use of the steel horseshoe leads to demise of the horse’s foot.  Trying to keep show horses sound and in shoes in at least the Mid Atlantic states is quite a challenge for horseshoers.  They might be said to be geniuses in their abilities and innovations to keep a hoof together and a horseshoe on it for the season. Traditionally, in the winter, the shoes were pulled and the horse’s feet were allowed to rest and heal.  However, in this age of climate control and indoor arenas, with competitions in Florida, Texas, and California in winter, Mid Atlantic and northern states in winter, and even jaunting off to Europe in between, horses, much less their feet, ever get a chance to let down and heal from competition.

Trimming a barefoot horse is becoming more and more scientific, but there are still many opinions and techniques for trimming a barefoot horse.  Most times the trim depends on the environment in which the horse lives.  Barefoot horses need to be trimmed more frequently than shod horses.  Their healthier feet grow at a faster rate (more blood supply).  So farriers will always be able to make a living.  Some horses may be able to perform soundly and tolerate steel.  And if the owners and horses are happy with that, (however I have never spoken with a horseperson who does not have a problem with his/her shod horse’s feet) then, let them be shod.  The most sensible thing for most all horses, however, is to be barefoot and moving around when they are not working, to be worked barefoot if their feet are able to handle it, and to be booted if they are not able to be worked barefoot.  For us to be able to have the option to care for our horses in a way that makes the most sense for their health, we must have the option to show our horses in dressage competition in removable boots.  The USDF, USEF, and FEI will not move on this unless a great number of competition participants, or a smaller number of influencially placed owners or competitors request a rule change on this matter.  I hope you will request it.  Below, and in Part V are photos of horses feet which were destroyed by horseshoes and healed by time, barefoot, and hoof boots. 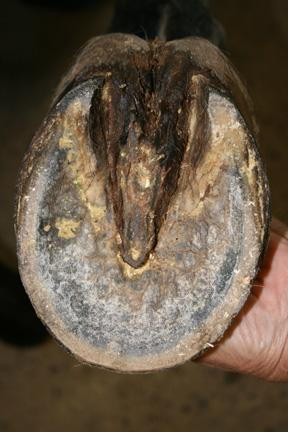 This is the right front foot of a 5 yr old Lusitano stallion on May 12, 2010, two weeks after I had purhased him.  This was a quality and well cared for horse.  He had written veterinary certificates of inspection and health by three different vets.  He was in steel shoes on all four feet when he arrived on April 28.  I put him out in the field.  He came in six hours later with all shoes gone.  The frog is an infected mess, and barely there.  It is shrunken and withered, and full of holes and rotten flesh. If I would touch It with my fingers, he would pull away in pain.  The heels are totally contracted, almost touching each other in an effort to make support at the back of the foot which is missing because of no frog.  The wall is riddled with white line disease.  The outer wall is broken off the inner wall so that outer wall does not really touch the ground.  He is walking on sole and some heel wall.  This is the result of living in a hot, wet climate-Brazil (sort of like that of southeastern PA) in steel shoes. 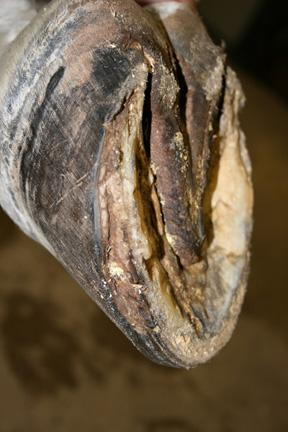 This is the left hind foot of the same 5 yr old Lusitano stallion.  He does have a frog (hind feet usually do), but the wall is gone at the ground level.  It has been rotted away from white line disease.  The outer, pigmented wall is not attached to the inner wall for about ½ inch.  The white line is dissolved.  The horse is literally walking on sole.  He was booted in Softride boots for about a week.  Being a stallion, his pain tolerance level was high and his feet grew fast.
This photo is two weeks after I had already been working on his feet for that period of time.  So this picture is actually good in comparison to what I saw when the shoes came off the day I got him.  I guess I was in such shock and so preoccupied with trying to save the feet and the horse that I forgot to take pictures for 2 weeks.  This horse had appeared sound in shoes.  He was vetted sound for purchase by vets in Brazil, Florida, and California.   Do you think a horse with feet like this could be called sound? 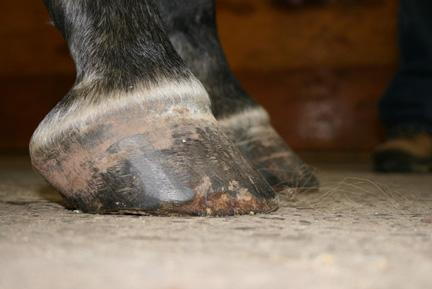 Here is a side view of the right front foot.  You can see how high the outer wall and inner wall as well is broken off the underlying corium.  The dorsal wall is dished  because of the lack of attachment of the wall at the toe area.  You can see that the growth of the dorsal wall is coming down tight and in line with the pastern angle to just about where the periople ends.  Then the wall starts to flare out and away from the coffin bone.  The coffin bone would most likely be rotated in the foot which tends to the club foot conformation.  You can see that the dorsal wall has been vigorously rasped in an attempt to hide the flare.  That of course only weakened the dorsal wall even more so that it could flare more easily.

I think this blog is getting too long and I probably will have difficulty getting it to go up, so we have to wait for Part V to see the photos of the feet 2 years later.  Teaser on what is to come:  Barefoot and hoofboots, and 2x daily medication of every sort for 2 years and there is finally a frog.  The whole inside of the foot had to heal and develop as well.  The wall still tends to detach at the toe on the right front (on all feet, actually).  Two years in rehab and still not totally healthy.  Thank goodness for hoof boots so that he can be in training for these 2 years.  But because of USEF rules, he can’t be shown. 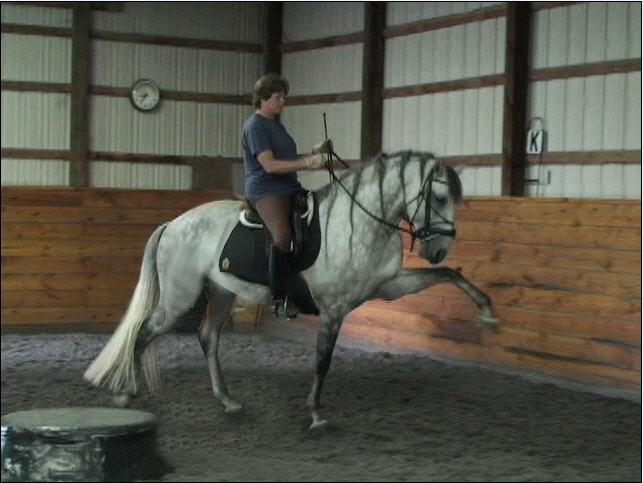 So here is the horse, 2 years later, doing the most disdained  of movements in competitive dressage—the Spanish Walk.He is barefoot.  The arena footing is really cushy, however.