In Part IV, we showed the 5 year old Lusitano stallion’s feet which had severe thrush, mangled, decayed frogs, and white line disease—all the result of  nailed on shoes and environment.  Previously, I gave references for you in order to learn how shoes lead to the destruction of horse hooves.  Basically, and briefly, in a shod foot, the disuse of the foot, especially the frog and sole, which do not touch the ground and therefore cannot stimulate the internal structures of the foot, and the compromised blood supply within the foot, which is a result of peripheral constant pressure on the hoof, all lead to atrophy of live tissues, which are cushions within the hoof wall.  Infection gets into the hoof wall via the nail holes, the diseased frog, and the poorly connected inner and outer hoof walls, and causes even more destruction of atrophied and weak internal structures.  So, truly, if the horse’s hoof is not able to be used as Nature meant it to be, it will be lost. (Use it or lose it).  The only way to enable the horse to use his foot properly is to allow him to be barefoot with proper trimming.  The only way to enable most performance horses to perform is to give them hoof protection.  The only hoof protection which will enable their feet to function optimally is the hoof boot, with or without a 6 to 12 mm pad.

After 1 ½ years of proper trimming and working the horse with light, padded boots, we were finally able to grow out an almost healthy foot.  The foot is still in the process of healing.  The heels are still somewhat contracted, and the frog is small and narrow.  However, the frog is now firm and properly shaped.  It no longer resembles a piece of rotten macerated wood.  Finally, I can push on the frog with my fingers without having the horse pull his foot away.  Finally, he can endure his own weight to be taken partially on the frog.  The heel buttresses are opening up, as the frog begins to grow and be a support to the back of the foot .  In Part IV, you can see that the heels were growing together in an effort to support the back of the foot, rather like a bar shoe, because there was no frog support or internal frog support or digital cushion support back there.  The horse, when walking, should touch his heels to the ground before he touches down with and rolls over the toes.  A horse with caudal heel pain or atrophied internal structures of the back of the foot will toe walk.  It looks pretty.  It is not correct biomechanically.  Toe walking leads to all sorts of other foot and upper limb lamenesses.

I can state categorically, that this horse’s feet would never have healed if I had left him in shoes.  I could not have rid him of the infection. 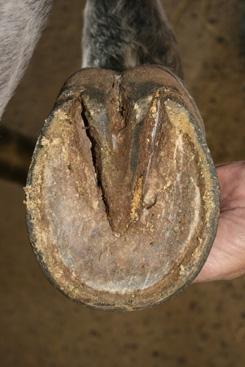 For 1 1/2 years I have treated this horse’s feet daily with antibacterials and antifungals of every sort. I have manipulated his environment to dry it out and firm it up as best as one can do in the southeast Pennsylvania terrarium climate.  He has had weekly tweaking to trimming his hooves.  He was worked in Easy boot Gloves.  He was not able to be shown because horse boots are not allowed in dressage competition.  Now, where do we go from here with a would- be performance horse? 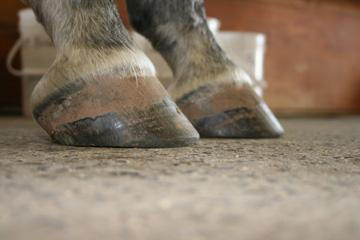 The hoof wall is now healthy and shiny.  The dorsal wall is not as dished as it was in Part IV.  This means the hoof wall is adhering more tightly to P3 and not ripping away from the corium and flaring.  There is a real frog that is not infected anymore.  The toes are still a little long.  This is because I am too chicken to file them off any shorter.  Why would I want to ruin 1 ½ years of healing the feet to this point, by nailing on shoes, even for a show?
I hope that anyone who finds that hoofboots make sense for performance horses would appeal to the powers that be in USDF, USEF, and FEI for allowing their use in competition.

Part VI will show more photos of horses with hooves ruined by shoes and healed with proper trimming and the use of hoofboots.