Hoofboots, Barefoot, and Horseshoes Part I

Horses competing in dressage competitions are not allowed to wear hoofboots (USEF Rule Book DR121.7 ).  They can be shown with horse shoes-- nailed or glued on.  They can be shown with horse shoes and pads made out of any variety of substances.  They can be shown with any type of material glued around the hoof, as long as it does not extend above the coronary band.  They can be shown barefoot.   However, the one modern invention which is actually good for the horse's foot--the one hoof protection device which  actually aids in proper development of the horse's foot,--the one hoof protection device which will not harm the foot in any way,--the one hoof protection device which will allow a horse to compete longer, more regularly throughout the season or years,-- the one hoof protection device which, in aiding foot development rather than destroying it, will maintain soundness of the horse longer, and which will allow more horses to compete in USEF dressage shows,--that device which takes us out of the iron age into the 21st century,-- is forbidden by the USEF.   The reason given by officials associated with the USEF as to why hoofboots are not allowed, is that substances can be hidden in the boots which will affect the performance of the horse.  Now this is an erudite reason.  Let us examine that reason further:
1. Can substances be hidden in the boots?  Yes they can.  Would any horse owner do that?  Only if they were totally stupid.  The reason is that the boots suitable for dressage competition can be removed in about 3 seconds per foot and examined.  There are at least 8 minutes, if not more, between rides in a competition.  If a steward wanted to examine a horse wearing 4 boots, (but most horses needing hoof boots would only have them on the front feet) he/she could do that with the help of the rider or rider's groom in about 30 seconds.
2.  Can illegal substances be hidden in nailed or glued on horse shoes, or better yet, under the pads of nailed or glued on horse shoes?  Yes they can.  Would any horse owner do that?  Maybe.  Who is going to pull off nailed or glued on horse shoes at ringside?  Who is even going to request that a horse go over to the farrier to have all its shoes removed?
Conclusion:  It is a lot easier to hide illegal substances under nailed or glued on shoes with or without pads, than it is to hide something in a horse boot.
Just think of how many horses, whose owners would like to compete with them, cannot compete because of lameness due to foot problems caused mainly by nailed on shoes.  In the mid Atlantic states, the continually wet environment combined with the destruction of hoof wall by nails and nailed on shoes, forces owners to remove the shoes for a period of time in order to allow the hoof to heal itself.  Just think of what it would be like to have a horse whose feet were kept healthy and sound by being able to go barefoot, and then having an ability to protect the feet at competition venues with hoof boots.  Think of what it would be like not having to lay the horse up for weeks or months when it could be competing, in order to heal the feet.  Approving the use of hoofboots in dressage competition is an opportunity for the USEF to give the opportunity to competitors to actually do something beneficial for the health of their hardworking athletes.   In addition, the ability to use hoof boots would most likely result in an increase of the numbers of sound horses which would then be able to enter competitions, thereby making more money for the show organizers and the USEF.
The next installment will focus on why hoofboots may be the only answer for some performance horses to remain sound, and therefore able to do their job. 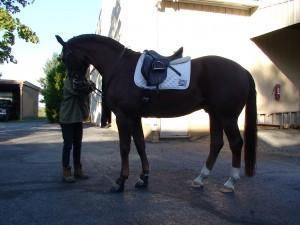 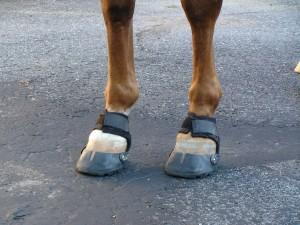 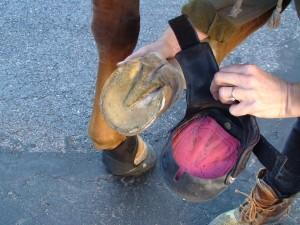