From here on out, I will show the pictorial saga of a horse’s feet from 2006 until now. The horse’s feet were destroyed by nailed on shoes.  In 2006 he was 8 years old, having been in nailed on shoes since age 2.   In 2001, he came to the USA from Germany.   From 2001 until 2006, he was on and off  “just not right”  to the feel, when being ridden.  Usually he would be sound right after shoeing, and then 4 weeks later, he would guard his front end, or maybe his hind end, one leg, primarily the right front, but maybe the left front as well.  We tried every sort of shoeing combination imaginable.  Some days he would be fine, then other days he would be reluctant to move.   With each passing year, he was becoming more and more stiff in the back.  He was looked at and worked on by vets, chiropractors, massage therapists, homeopaths, whatever.  No one could find anything wrong.  X-rays were always negative for anything.

The interesting thing was that though the years, his white feet would start showing bruises.  Black coloration appeared around the nail holes.  The farriers would simply say that bruising is common and doesn’t mean anything and that I only notice it because his feet are white.  One does not see it in the one grey foot he has.  The black coloration of the hoof was attributed to oxidation by the nails.  When the shoe was removed, and the sole was all black under it, the black was attributed to simple old dead sole and dirt under the shoe.

Between 2001 and 2006, Fabio’s reluctance to move became greater and greater.  His personality became nastier and nastier.  The personality problems are another book in themselves.  Suffice it say, it is clear now that the degenerating personality was due to the degenerating, painful feet. 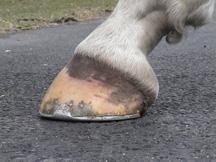 March 9, 2006.  This shows the left hind foot which is totally white, when healthy.  The 3 nail holes are black, and the black discoloration extends within the wall of the hoof under the nails and down to the shoe.  The farrier said that this was normal.  The horse was lame in the right front and right hind feet.  The shoes were pulled.  The black discoloration was white line disease which had invaded the hoof wall and deeper soft tissues.  The lame feet were abscessing out the frogs.  The infection was treated over the next 4 years.  Throughout that time, the feet would appear to be better, then the horse would become lame, and an abscess would break out at the frog.You can see bruising below the dirt at the coronary band.  All 4 feet were bruised like this.  The bruising allowed more bacteria to invade the damaged tissue.  So as long as there was bruising, the abscessing would continue 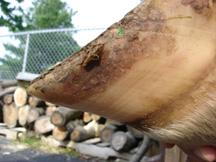 June 22, 2006.  The shoes were pulled March 9 because of abscesses in this foot and the right hind.  My pictures were lost in computer crash.This is 3 months later, and the photo shows the hoof wall which is detaching from the sole.  Basically there is not really any hoof wall to speak off.  It was like tissue paper.  You can see it peeling.  The white line disease had eaten all the matrix between the outer hoof wall and the inner hoof wall.  The horse was barefoot, but had no wall to stand on for support.  He walked on his frogs and soles.  His feet were flat, as this picture shows.  The inside of his foot was basically mush from the infection which would continue to abscess out over the next four years.  The infection was treated daily for 4 years, and his feet are still medicated daily to prevent bacterial and fungal infection from getting a great hold in the hoof wall and bars and frog. 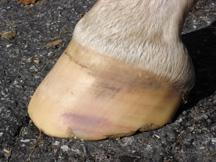 July 17, 2010.  The left hind foot.  The foot has grown down past the March 9 nail holes.  The bruising is growing down also.  The hoof wall is broken off at ground level where the nails holes were 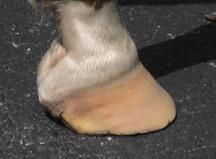 July 28, 2006.  Photo of the right front foot.  The rings of bruising are shown.  The quarter is dented in.  there is a shallow quarter crack in the indent.At ground level, the broken hoof shows the black infection in the wall.

Part VII will continue with more foot photos of the damaged and then healing feet.