Part VII showed the Feet of Fabio, 7 yr old Westfalen gelding, in July 2006, several months after his nailed on shoes had been removed because of lameness resulting from white line disease and subsolar abscessing.  The only thing we could do for months, was to treat the infection in all 4 feet with soaks such as Cleantrax, and apply every antibacterial and antifungal solution we could find to the separated walls, and abscess tracts in the frogs, and leave him barefoot so that his feet could grow out and heal the inside as well as the outside of the hooves. 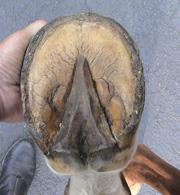 August 4, 2006.  Having been managed barefoot for 5 months, Fabio’s feet have started to try to grow wall and bars, which had been practically nonexistent in March.  The sole is weird and cracked, and the bars are very thin, broken, and still infected with white line disease.  The frog has soft mushy tissue on the left side where another abscess has broken out.  Note, however, that the heels are not contracted.  The frog is fairly large and well developed.  The posterior part of the foot is not too badly conformed.  This will change as we keep trying to get him in some sort of shoes so that he can be shown. 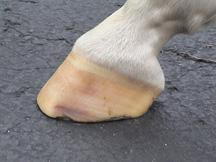 Here is the left hind, August 4, 2006, still trying to grow out the bruised areas of the hoof. The wall is still breaking off at the ground because of the separation and weakness of the wall due to the white line disease.  At this time, I was trying to figure out what I could put on his feet in order to ride him.  His feet were too fragile to go barefoot.  We were treating him daily with antibacterials.Finally, we came across Hoofwings , an innovative Hoofboot in which he could actually be worked. 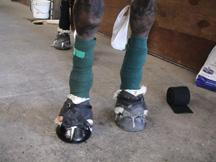 October 10, 2006.  In this getup, Fabio was sound to ride and train at fourth level dressage.  First we put a sock over the hoof to hold composite hoof packing into the sole for support.  Then the feet were wrapped in lambskin for cushioning.( I found this remedy of wrapping a horse’s feet in lambskin from a veterinary book from the 1800’s)  A hoofwing boot was placed over this.  A leg wrap was put on to hold the sock up and the lambskin in place.  The photo of the Chestnut horse doing Piaffe in Part I of this series is Fabio decked out in his hoofwing paraphernalia.  I am not requesting that horses be allowed to wear all this in  competition.  I am showing what I elected to do in my attempts to allow one performance horse’s feet to heal.   The hoofwings alone, however, without the sock, lambskin, and leg wraps would be a quickly applied and quickly removable protection for a horse which could not be shod. 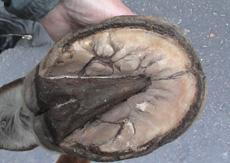 November 29, 2006.  The sole is finally getting thicker, but cracking and weird.  This shows how poorly developed the cushions and tissues inside the hoof are, and how weak the sole is.  The infection and abscessing have eaten away the soft tissues on the inside of the hoof.  The sole, in attempting to hold up the horse, is flexing and cracking.  The bars are growing all over the place in an attempt to support the bottom of the foot, but the infection is deep within the hoof capsule, so the wall abd bars are weak and friable.  The frog is trying to support the foot as well.  The horse was sound to ride in the lambswool, pads, and hoofwings.  He could not be ridden barefoot, as the feet hurt him too much.  The hoofwings provided a firm, fairly hard, and level surface for him to build up the foot.  Only exercise on suitable surface is going to heal the feet.  Recommending that the horse stay in a stall, and be periodically handwalked would have simply made the feet deteriorate more quickly.  Remember about the blood flow in the foot and what makes the blood move in the foot in order to nourish it.

Part IX will show more photos as we try to heal Fabio’s feet and get him into some hoof protection which is acceptable to the USEF and USDF for competition.  You can believe that in 2006,  I was writing to and calling officials in the USEF in an effort to gain approval for  hoofboots in competition.  No one was interested.