In Part IX, we showed Fabio’s feet, which had finally healed, we thought, in February 2007, now damaged between June 2007 and August 2007 from a stone going through sole of right hind when he was being shown in dressage competition , and from a new attempt at a horse boot, which unfortunately had small metal plates and screws as part of the support system, and which bruised the hoof wall.  By late July, 2007, I was desperate to put some sort of allowable hoof protection on the horse so that I could train him and show him and not have to spend hours daily putting on all sorts of garb so that he could be ridden. We decided to try to glue on a special composite shoe which was supposed to support the sole of the horse, along with being able to deform along with the hoof wall when the horse moves.  Though the shoe is a good idea, and though it may work well in arid parts of the world,  it did not work at all in Pennsylvania rain and mud fields on a heavy, and very active 17 hand dressage horse.  The glued on shoes fell off within a week.  We reapplied them at a not very inexpensive rate, and they fell off again in about a week.
So, the next option was to glue them on, pack them with hoof packing support, and nail them on with just 2 nails on each side of the foot for a total of 4 nails.  In horses with good hoof integrity, this glued and nailed on shoe may work.  Apparently it works on some horses even in Pennsylvania.  It is a shoe which is now accepted by the USEF.  It was used by rather famous horse and rider on the US Olympic Dressage team, so it is now legal in dressage competition.  Obviously it has its benefits.  On Fabio, and in his lifestyle of daily turnout for 12 hours a day, it did not work.  As a matter of fact, his feet got infected all over again from the nails.  The feet started to abscess out through the frogs again.  So by September, 2007, we were back at square one a year and a half after the original destroyed feet problem was discovered.  However, we did not stop there.  We removed the shoes, and allowed him to heal the feet barefoot again, and could not show, and reapplied the shoes, and tried again and again.    We tried the shoes on and off for a year.  Then in 2008, Casting the feet hit the market.  We tried the wrap on casts.  They were actually legal, because they did not come above the coronary band.  A cast would stay on a foot of one of my horses for about 10 days.  However, I had the bright idea of casting the horse right before a show.  So at one point in the fall of 2008, I put on the casts and took Fabio to a show.  In the warmup ring, a steward picked up a perfect hoof cast out of the arena and asked the competitors if they knew what the thing was.  “Oh, it is my horse’s shoe”, I said.  By the time I got into the arena, the other cast was off.  I rode him barefoot through 2 classes.  By the second class, he was barely able to move, he was so foot sore.  So much for casts as hoof protection in some horses for any period of time over a day. 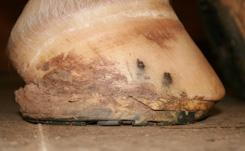 August 8, 2007.  Right front foot. This is the glued and nailed on composite shoe, about 2 weeks after it was put on. The glue bond is breaking down, and the ominous black goop is coming out the nail holes and discoloring the wall around the nail holes. The foot is getting infected again after only 2 weeks of nails. 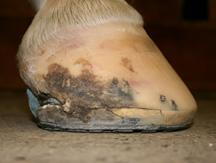 September 29, 2007.  Here is the right front foot nearing the end of the second shoeing with the composite shoes. Now there are 4 nail holes on each side with black infection coming out of them, and bruising is appearing on the quarter between the two groups of nail holes, and at the coronary band.

October 8, 2007.  Right hind foot.  This is about a week after pulling the nailed and glued on shoes.  The sole is nice, and has grown thick.  The old injury from the stone through the sole on June 4, 2007 has moved lateral as the sole growth moved laterally.  The frog, however, has an abscess hole in it in the sulcus.  The infection that was able to get started through the nails penetrating the hoof wall, is now under the sole and abscessing out the frog again. 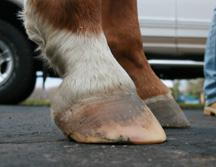 December 5, 2007.  Two months after the glued and nailed on shoes were removed.  The horse has remained barefoot, and the feet are healing again.  The bruising is growing down the foot.  There is still black infection at the area of the nail holes at ground level.  In general, the feet don’t look bad, but it is interesting that the extensive bruising came again along with the shoeing