This section shows the results of another year’s worth of trying to find a solution for getting some sort of shoe on the horse, Fabio, so that he could be shown.  The USEF would not allow any sort of hoofboot in dressage competition.  This was a dressage horse.  I wanted his feet healed, but I needed to figure out how to get shoes on him in order to show him.

By Feb 15, 2008, the feet were not  looking so great.  The infection was raging inside all the feet.  The horse was barefoot in an attempt to allow the feet to heal.  He wasn’t really being ridden much.  It was winter. 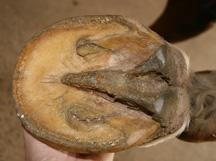 Feb 15, 2008.  Right front foot.  The bars are growing wild in an attempt to build a  support for the bottom of the foot. The  frog is withering.  Abscesses keep coming out of the frog and the whole foot is beginning to look rather contracted at the heel.  The frog is atrophying.

Feb. 15, 2008.  Right front foot.  The heel is high, the toes are too long but dubbed off in an attempt to correct the flair.  The bruising of the hoof has grown out.  The horse is trying to build hoof wall and internal soft tissues.  The indentation in the quarter is not so prominent as it was.  We were at a point that we could not even try nailing on shoes again until all the infection was out of all the feet. 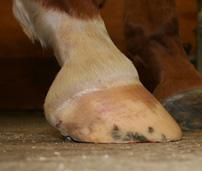 July 18, 2008.  Right front foot.  This is after we tried again in July to glue and nail on the composite shoes with the sole packing  in order to be able to train and show the horse. The feet had been healing from the last attempt at gluing and nailing on shoes Sept, 2007.   We thought that after 9 months, maybe the horse could tolerate nailing on shoes.  Wrong!!!This picture was taken a few days after the composite shoes were removed.  The toe is getting even longer.  It is flaring away from P3.  The heels are becoming more underrun.  The foot is beginning to look foundered.
You can see the black infection within the hoof wall below the infected nail holes.  You can see bruising again in the quarter, below the coronary band.  Every time we tried to nail a show onto this horse, the inflammation set up by the nails into the hoof tissue resulted in bleeding into the hoof wall.  Remember, this had been going on prior to March 2006 as well, but the farriers always said that bruising is normal.   Bruising is not normal.  This particular horse only got bruising in his hoof wall when shoes were nailed and glued onto the foot.  Working barefoot and in hoofboots with no screws and plates in them did not cause bruising. 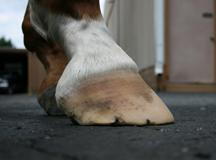 August 12, 2008.  Right front foot a month after the composite shoes were removed.  The nail holes still have black infection in them, but they are growing out.  The toe is long.  Showing season is ending. How can I show the horse when I can’t nail a shoe on him?  The casts I tried to use fell off at a show.  What other alternatives are there?
A glued on Sigafoos shoe?  No nails. So in September, we went to the experts on Sigafoos shoes.  This is a viable alternative to many horses which cannot tolerate nailed on shoes.  Many people swear by these shoes on their horses.  We hoped these shoes would work on Fabio, even though it meant a whole day’s trip every 4 to 5 weeks to get them put on.

Part XII will show the lack of success we had in making this horse stay sound to show in shoes which are glued onto the dorsal hoof wall with a cloth cuff.