My objective in showing the failure of nailed on horseshoes and glued on horseshoes with one particular horse over a period of 7 years is not to disparage any shoeing techniques, any types of horseshoes, or any horseshoeing professionals.  The methods we tried on my horse in attempts to protect his feet and be legal for dressage competition were all well accepted shoeing methods, all applied by experts in their fields.  My point in showing the results of these shoeing attempts on one horse, is to give credence to my claim that not all horses can tolerate horseshoes.  If one horse cannot tolerate horseshoes, we can deduce that there are many other horses that can’t tolerate horseshoes.   If they cannot tolerate horseshoes, they cannot be shown in dressage.  If these are talented, well trained dressage horses, it is a travesty that they are prevented from showing because of lack of acceptance by dressage competition committees of other methods of hoof protection.  The reduction in numbers of horses which could be shown in dressage also causes a reduction in entry fees for show managers, USDF, and USEF or FEI.

The photos which will follow and which will show the effects of various methods of attaching shoes onto this one horse, are not pretty.  The horse’s feet were pathologically deformed and became infected because of the shoes on account of his poor quality hooves and feet which could not tolerate the shoes.  One can see from the photos how the feet were hurting, and one has to feel for the horse in pain.    Each time a new shoeing system was tried on this horse, he would go sound for a few weeks.  But as the feet deteriorated while they were in the shoes, he eventually became lame.  Then we had to pull the shoes, let the feet heal, and try some other system.  As I said in previous episode, this same story of trying different shoeing combinations, pulling the shoes when the horse went lame, treating the feet to rid him of infection, and leaving them barefoot to build stronger structure, only to then try another shoeing combination, went on for 7 years.  Finally, in September of 2009, I said enough is enough, quit trying to put shoes on him, and left him barefoot in the field, worked him in boots, and he has been sound for a year.  The horse has finally begun to want to move forward on his own again.
The horse is ready to show in dressage competition, free from pain.  For the sake of the talented horses which need hoof protection which has been enabled by modern technology, ie, hoofboots, I  beg the horse federations to approve the use of hoofboots in dressage. 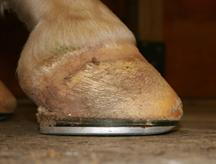 November 4, 2008.  Right front foot.  On Sept 30, 2008, about 2 months after the horse’s composite shoes were removed, and after the feet had had a chance to grow out from the infection, we put the shoes which were glued on to the dorsal wall by a Sigafoos cuff.  This is 5 weeks after the initial shoeing.  The horse was sound to work during these 5 weeks.  The toe was growing very long, and starting to flare about an inch below the coronary band. 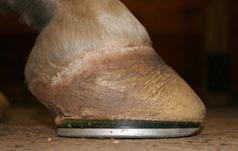 December 9, 2008.  Right front foot.  This is about 5 weeks after the 2nd reset with this cuffed glue on shoe.  The horse had been sound for the previous 5 weeks.  The toe, however, is really growing long, and the heels are becoming under-run.  The flare of the dorsal wall, which starts about an inch below the coronary band, is becoming very horizontal.  This is not good.  The foot looks really weird. 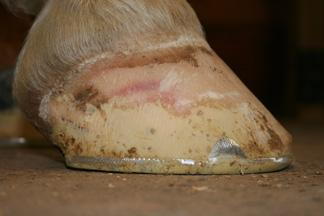 December 12, 2008.  Right front foot. About 2 days after the third reset with the Sigafoos cuff, the horse became lame.The foot was really long and the toe was out of control long.  On this day, the cuff was removed and the horse was shod with aluminum glue on shoes, glued to the sole of the foot.  Here you can see extensive bruising of the wall at his favorite bruising spot, the quarter .  This time the shoe had not been nailed on.  Why the bruising?  I do not know.  Could the cuff have caused too much constriction on his very soft walled feet?  Could his attempts at rolling over the excessively long toe have cause ripping of the (as we already know)  weak dermal laminae of the foot?  This foot is shown after the trim, but the heel is still  under run too much.

December 12, 2008.  Right front foot.  The heels are really squashed together now.  Remember in 2006, they were not contracted.  The walls are much narrower than the coronary band.  It looks like they are squashing the frog out the bottom of the foot.  The lateral cartilages are all squashed upwards.  This all occurred during the 3 months in the Sigafoos shoe, when the shoe elevated the frog quite far off the ground.  There was no frog pressure or sole pressure, and so the foot, with an already weak internal structure, just fell down, taking the frog and sole with it, and in so doing,  contracted from side to side.
Here, unfortunately, you can see that the heels of the hoof are glued to the heels of the shoe.  In the other glue on shoes, including the Sigafoos shoe, the heels were not glued down. They were free to expand and contract (to a lesser degree in the cuffed shoe than in the other composite shoe).  Now, the heels will not be able to expand at all.  This tiny squashed foot looks like it would not be able to support ¼ of a 1500 lb horse.  But, after this shoeing, the horse was sound for a while.