The next posts will show what happened to the horse’s feet over 6 more months of attempting to make glue on shoes or nail on shoes work for this horse.  The farriers were excellent.  The shoeing methods were common answers to other horses’ feet problems. Not so with Fabio.  Watching his feet simply disintegrate with every attempt to provide him with hoof protection was heart wrenching. 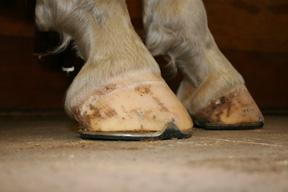 December 12, 2008.  Hind feet .  Whereas the front feet were being shod with glued on shoes since Sept 2008, we decided to try regular nailed on steel shoes behind.  Remember, though he was sound enough barefoot behind to be worked, when he was shown at a horse park barefoot, he put a stone through the sole of the right hind foot.  Now the feet were healed, not abscessing anymore, and the farrier thought nailed on steel shoes would be just fine.  Here, everything looks relatively fine 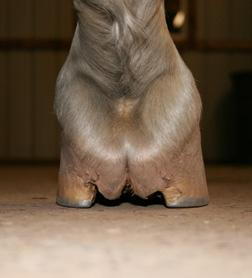 December 31, 2008.  Right front foot.  This is 3 weeks after the aluminum shoes were glued to the sole.  The heels are contracting even more than they were as shown in the photo in Part XII from Dec 12, 2008.  The collateral cartilages are practically vertical.  The coronet is much wider than the hoof wall.  The inside of the foot looks like it is being sucked out. This simply looks painful.  The horse seemed sound to train. Was this because, as Cole states below, that the nerves of the foot were so numbed by the compression that they effected an anesthesia of the foot? 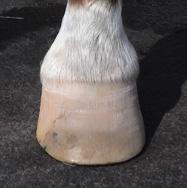 Right front foot back in Feb. 21, 2007, when it was finally healed from the infection caused by the nailed and glued on composite shoe.  Compare the relatively healthy bare foot to the foot on the right, a year and a half later, after trying various shoe combinations just so the horse could show in dressage competition. 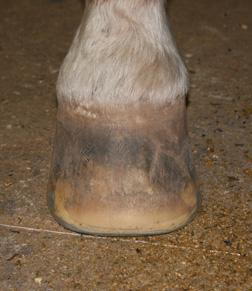 December 31, 2008.  Right front foot.  This is the front of the foot which is shown from behind in the photo above this one.  The photo is taken 3 weeks after the aluminum shoes were glued to the sole (not to the dorsal wall like the cuffed Sigafoos shoe).  The hoof is taking on a weird hour glass shape.  There is a description of what is happening to such feet in a little farrier’s manual from 1879, written by J.R. Cole, called The Horse’s Foot and How to Shoe it.

Since nailing steel shoes to horses’ feet has not materially changed over the past 1500 years, one can believe that any pathology one sees in horses’ feet today, has certainly been seen and described by other people before us.  I will quote the description of this poor foot from Cole’s book in the box below.

Feet which show inner contraction:  “The most mischievous results follow in contracted feet, when the lateral walls or sides of the foot are compressed, as seen in the drawings.  The outside crusts (hoof wall), just below the coronet, contracts and spreads itself on the ground, until it has become like an inverted butter dish.  Inner compression differs from that of outer contraction, in being midway between coronet and ground surface, instead of at the ground surface alone.  Inner contraction is serious, inasmuch as the wings of the coffin bone, the lateral cartilages of the foot, and nerves coursing along each artery, suffer by compression.  When the nerve of the foot is touched, the life of the foot is endangered; and when the nerve becomes destroyed, the foot itself becomes dead, not only changing the tough living crust without, to a lifeless, brittle mass, but also the bones within to a like condition.  The cartilages will ossify for want of nutriment, and the joints will lose their action.
The compression of the lateral wall will also change the position of the bones within the foot.  The heel of the coffin bone will in many cases become raised, and will incline to the perpendicular, but this results in simply pulling the toe of this bone away from the inside toe of the coffin box (Hoof).  This disengages the sensible laminae at that point, and Nature starts a fungus growth of horn in the diseased laminae (Laminar wedge), to assist the weakened torn down sensible (dermal laminae).  This partial and unnatural erection of the coffin bone at the heel, throws the weight of the horse on the outside heels of the hoof which, in inner contraction squelches the heels outwards, and permits an increase in the length of the toe, by this morbid fungus growth before mentioned.
Again, in proportion to the height or neglected growth of the ground surface of the foot, it will close in around the coronet.  A horse having low heels, at grass, with a hoof kept elastic and supple, by the natural moisture of the ground, like the unshod colt, with liberty to run, will never have contracted feet; but if shod, and then stabled on wooden floors, the hoof becomes hard and brittle, and thrush sets in as a consequence, and if the smith gets a hack now and then at the bars and frog with his knife, contraction will ensue.
Shoeing is undoubtedly a necessary evil, but this kind of work of tearing down bars and leveling frogs of a contracted foot, is curing a disease ‘with a vengeance’ before a horse has it.  The bars are the main impediment to contraction.  The frog, of course, should be left untouched, but the toe should be rasped short, the heels lowered, and the quarters weakened, and the horse be turned out.  It will take some skill, time, and care to effect cures in bad cases.”  J.R. Cole.

Why did Fabio’s foot contract like this when the shoes were glued to the bottom of the foot and the entire sole was covered with glue?  I have been complaining that horses in southeastern PA, where it rains all the time, have too much moisture in their feet.  The feet are so wet that they spread out and flatten.  The soles are flat and the toes grow too long and the heels become under run.  Cole states that contracted feet are a result of becoming too dry, not enough moisture.  Does the glue which is spread over the whole bottom of the sole suck out moisture?  Perhaps the glue prevents moisture from going into the foot through the frog and sole.  Contrary to popular belief, the hoof wall and sole are not dead.  Just because one can put a nail through them does not mean they are dead.  The hoof is very alive.  Cole even calls the hoof a “tough living crust”.  The hoof is a transport membrane for moisture and chemicals into and out of the foot.  Again, this is another long story for another time.