Evolution of Fabio’s foot going from bad to worse over a period of 4 months in glued on shoes, then in nailed on steel heartbar shoes.  Front feet and back feet once again destroyed by nails.  It is 2006 all over again.  No farrier will believe that a horse can’t tolerate nailed on shoes.  But every farrier I had work on Fabio was an excellent Farrier.  My point is, there are some horses that do not tolerate nailed on shoes. 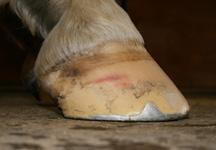 January 29, 2009.  Right front foot 3 weeks after being reset with the glued on shoe.  He has now been about 6 weeks in shoes glued to bottom of foot.  The bruising at the quarters is very prominent.  He is still sound to ride.  Heels are starting to crush and bend. 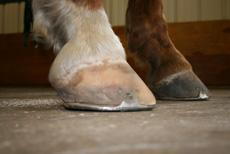 March 15, 2009.  Right front foot.  Between Jan 29 and March, Fabio started to go lame again in the right front foot.  So the farrier decided maybe a heart bar shoe would be better.  This would give frog support and allow the contracting heels to spread.  For some reason, the coronary band is being shoved upward at the quarter.  The toe is long and whole dorsal line of hoof and pastern is broken forward.  The heartbars are now nailed on.  No glue.  The farrier thought Fabio would tolerate nailed on shoes.  Don’t all horses tolerate heartbar shoes?  After the shoeing, he was initially sound and working. 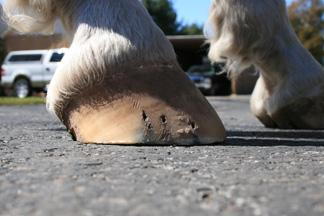 March 23, 2009. Right hind.  Fabio became acutely lame in the right hind.  Shoes were pulled.  You can see the black infection has come back within the hoof wall below the nail holes.  The same old problem all over again.  He tolerated nailed on shoes in the back feet for 3 months, and then, lame, infection, and abscessing out the frog. 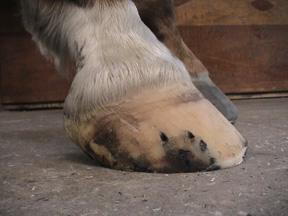 May 13, 2009.  Right front foot.  Two months after being in nailed on steel heartbar shoes (he had been reset in April).  The horse became acutely lame in front while being ridden in a clinic May 10, 2009.  The shoes were pulled.  The foot is one rotten mess of while line disease again.  Black pus is coming out the nail holes.  Black infection is in the walls of the hoof.  He was abscessing out the frogs.

May 13, 2009.  Right front foot sole. Heart bar shoe and hoof packing were removed to reveal severe white line disease, white line even in bars.  Abscessing out the toe at the black line.  Bruising all over the sole.  The frog is a scraggly black infected mess.  No wonder the horse was lame.  However, now the nailed on heart bar shoe has to be eliminated from the legal items for Fabio to wear so that he can show.  Is anyone beginning to believe that this horse cannot tolerate glued on shoes, nailed on steel shoes, and glued and nailed on composite shoes? 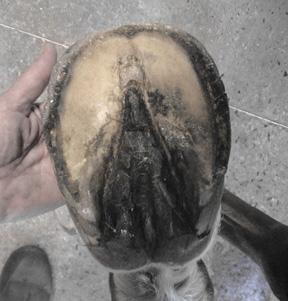 May 19, 2009.  Right front foot.  The frog is a black, infected, ragged, mess.  It was very painful.  Now the horse could not even be comfortable barefoot.  Luckily, Easyboot gloves hoofboots came on the market, and were the perfect solution.Even with a frog like this, Fabio was sound in the Easyboot gloves.
We had found the answer!!  Except that the hoofboots are not allowed in dressage competition.