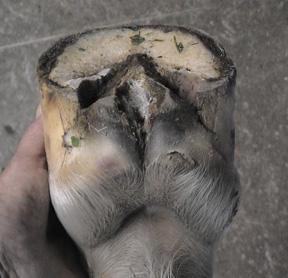 May 25, 2009.  Right front foot.  This is 2 ½ weeks after removal of the nailed on steel heartbar shoes.  An abscess has burst out of the medial heel (slit on heel on right side of foot in photo) and the bruise on the lateral heel is an abscess which will burst out later.  The foot is very contracted.  The heels are so contracted, the insides of the foot can do nothing but become damaged, crushed, and later infected.  You can see the white line disease between wall and sole.  You can see crumbling wall.  You can see huge bars which grew, but which have infection still in them.  All this happened because a famous farrier thought this was a normal horse which could wear remedial heartbars and be able to be shown in dressage competition.  The horse and I had been this route for years.  The point is that not all horses can tolerate shoes. 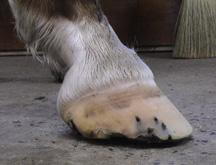 May 25, 2009.  Right front foot 2 ½ weeks into recovering from the damage and infection created by the nailed on shoes.  The black, white line disease infection is present at all nail holes, and the hoof wall is rotting away at ground level from the infection.  This horse’s feet have been treated 2x daily for over 3 years with every sort of antibacterial and antifungal white line disease medication and thrush medication.  His stall and his outside environment are as clean and pristine as one could ever find.  Yet this horse gets infected feet from being shod.The hoof looks pretty awful, but interestingly, at this point, the horse is standing fairly comfortably.  His hoof pastern angle is fairly normal.  He was sound to ride in hoofboots. 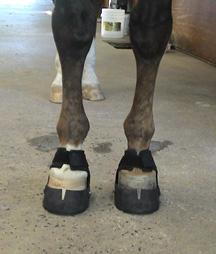 May 19, 2009.  This was the first time we tried the new Easyboot Gloves.  Even though the horse’s feet were in as terrible condition as has been shown in the photos in previous posts since we started trying to put glued on shoes or nailed on shoes on him, the horse, Fabio, was sound to ride in these boots.  What a wonderful modern invention for horses!   I cannot see any reason anyone could object to such hoof protection in the dressage ring.  These boots can be put on in 10 seconds or less, and removed in 3-5 seconds.  Why should the horse not have the same luxury as human beings in being able to remove his shoes and give his bare feet relief after a day’s work? 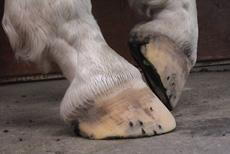 May 25, 2009.  Right and left hind feet recovering from the damage done to them by the nailed on steel shoes.  Remember, this white line disease occurred within 3 months, while the horse was wearing nailed on shoes.  The white line disease is still present all the way up to the highest nail.  It will take quite a while to get this infection out of the foot.  Maybe 6 months now.What a price for the horse to pay, simply because the owner wanted to show it, and to do so had to comply with archaic competition rules.  I even tried to show Fabio at a schooling show in hoofboots.  Before I entered the show, I called the show manager for permission.  “Oh, no!” she said. “We follow the USEF and USDF rules, and we cannot allow hoofboots at our schooling show”.  I will refrain from commenting on that. May 19, 2009. Right front foot.  Even though the bottom of the feet looked like this coming out of the Heartbar shoes, with this rotten, ragged, thrush infected frog and whiteline disease, the horse was sound to ride in the hoofboots pictured above.  Oh yes, and under the heartbar, when the shoe was on, the hoof was packed with the special Vettec copper sulfate impregnated acrylic packing so as to stop infection.  This photo shows how well that worked.Can anyone even imagine the expense I have gone through with this horse in 3 years, with medicating daily, grooming the pastures with pea gravel, special bedding for the stalls, every kind of shoe imaginable put on by the best farriers, rehabbing him every time the shoes destroyed his feet, trying known boots, eventually casts, inventing hoof wrapping devices, labor in working on his feet daily for 3 years, systemic antibiotics, etc. etc., only to end up with this?  This is AWFUL!

June 27, 2009.  Even though we were at this time riding Fabio in Easyboot Gloves, we tried casting his feet, as casting is legal in dressage competition.  Here is a cast 1 week after I put it on Fabio.  It was in the pasture, neatly removed by the horse. It is broken all around the bottom, however.  Now, could I get one of these casts off if I wanted to?  Of course not.  Will it stay on at a show?  Of course not.