In July 2009, Fabio was going well in the hoofboots, but another  farrier suggested a solution for showing might be to glue on the composite shoes, use the hoof packing for sole and frog support, and then use casting material and glue to add support to the shoe and keep it on.  No nails.  The system had been tried on other horses and worked.    After two shoeings with this method, Fabio gradually became stiffer and stiffer, and finally, he became acutely lame on the right front foot.  Below are photos of the feet, 7 days after the shoes and glues on cast cuffs were removed. 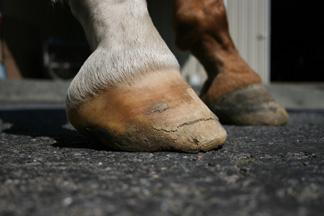 September 6, 2009.  Right front foot.  This  is 7 days after the composite shoes with glued on casted cuffs were removed on August 30, 2009.  The dorsal wall of the distal toe peeled off from the glue.  The underlying inner wall looks like petrified wood.  The hoof is bruised midway down the hoof.  The indent at the quarters is very prominent.  The heels are totally run under.  It is as if the feet had been bound to the shoes by the casts, or sort of a Japanese foot binding treatment.  The entire foot was overly compressed by the shoe glued to the periphery, the hoof packing pressing on the sole from below, and the cast causing circumferential compression as well as dorso-plantar compression, pulling the foot downwards into the shoe.  When the casts and shoes were removed, I was horrified, to say the least.  All in trying to come up with a solution that would be legal for showing.  No wonder, with feet that have been destroyed by man and manmade nailed and glued on hoof devices for 9 years, the horse was becoming stiffer and stiffer in the back.  The pain in his feet must have been excruciating. 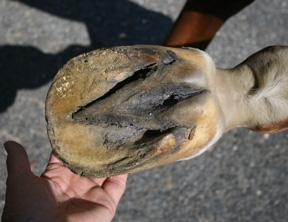 September 6, 2009.  Right front foot.  The bottom of the foot does not look so bad.  The frog is big and seemingly healthy.  The heels are crushed and curved forward, but they look like they have decontracted.  The sole is thick.  There does not appear to be much infection.  There is, however, no hoof wall to bear weight.  It has died and peeled off.  As soon as the shoes were removed, the horse became more sound.

September 6, 2009.  Left hind foot. The cast is still stuck to the foot because I was in such shock at seeing the dorsal wall peeling off that I could not remove anything else that was adherent to the tissue.

October 14, 2009.  Right front foot.  Because there was no wall to support the foot, heavy bars rapidly developed to take some of the weight.  The heels are totally underrun.  Mother Nature is working overtime to heal this foot, with the bars spreading out all over the sole of the foot. 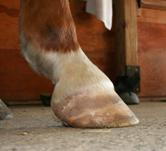 November 18, 2009.  Right front footThe feet have been barefoot to rehab since August 30.  It looks pretty good now.  Of course, on August 30 I made the decision to never attempt to shoe Fabio with nails or glue ever again.  At this point, he was sound and working in Easyboot Gloves.  Life was good, finally.

November 18, 2009.  Right front foot.  The frog is remodeling and shedding.  The heels are decontracting.  The voluminous bars are wearing down.  You can still see remnant of the heavy sole that grew around the frog as an extension of the bars.  It was an attempt to support the foot since there was no wall.  Gradually, the walls are growing out and looking healthy again.