Horseshoes were put on Fabio, and finally removed for the last time on August 30, 2009.  Since then, he has been left barefoot to rehab his feet.  He is worked in Easyboot Gloves, which can be put on in less than 15 seconds, and removed in less than 5 seconds.  Since the horseshoes were removed, the horse has remained sound.  It took about 6 months, until February 2010, for the feet to look normal again, as they regrew wall which had been bruised and delaminated because of the glue and shoes.  To date, December 2010, Fabio is sound in the hoofboots, and when ridden barefoot on good footing or grass.  Now, he can even walk over the stone drive to his pasture without flinching.  For 3 years he tried to avoid walking over the stones because they hurt his feet.  Now, he does not mind walking over them.

What will follow is a series of photos showing the feet as they are developing after all the insults from the infection as a result of the nailed and/or glued on shoes.  As I said at the beginning of this Series, I am not disparaging any method of hoof protection for horses.  I am relating the problem of one horse in particular.  As a veterinarian, I have seen the same foot problems in other horses in southeastern PA because of the environmental conditions.  There are some horses in PA which I have seen with relatively good feet that can hold shoes.  These horses are the performance horses that are not turned out to pasture.  They usually have problems with colic or foundering however, and their frogs are usually full of thrush.  They have other lameness problems as well, which owners usually attribute to the effects of training, or just because they are horses.  At any rate, as I said before, if one horse demonstrates that it cannot tolerate shoes in a particular environment, then there are other horses that cannot tolerate shoes.  One can go to the many websites, magazines, and blogs where other people show anecdotally or academically how their horses, which also were chronically lame in shoes, became healthy and could perform barefoot or in hoofboots.  I listed a few of these sites at the beginning of this series, but there are many more, which anyone who is interested can find.

Anyone who cares about horses, should want to discover and implement the best methods for caring for them and preserving their health while they are serving us.  It seems only logical that those people in charge of making rules for competitions in horse sport, should want to make legal a form of hoof protection that is good for the horse’s feet.  Until that time, Fabio , and many horses like him, and their owners will continue to show off in their backyards, instead of being able to show off in competition.  In this economy, especially, that is a waste of contributing to increasing the GNP, revenue, and jobs for the staff in horse federations. 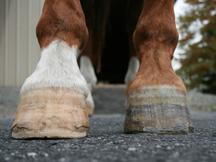 October 14, 2009.  Feet are recovering from the glue.  The wall looks awful, but the shape of the feet is good.  The good shape is due to all the sole support which has developed from the massive bars that are growing to take the place of the weakened hoof wall. 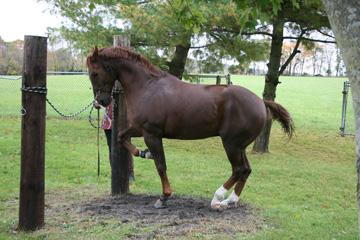 October 18, 2009.  Unable to show, Fabio does piaffe in Hoofboots in the pillars.
See all that beautiful pasture and grass in the background?  It is interesting to note that the PA pasture is a destroyer of hooves.  The grass is too full of sugar, and the ground is too moist.  Sugar makes fat horses which are prone to laminitis, and soft moist ground makes soft hooves which flatten, flare, and rot away easily.