The fact that Fabio is 16 months out of shoes and his feet no longer abscess daily, feet no longer are bruised, hoof wall is finally growing, and he is sounder than he has been in years, is testimony that horses’ feet can heal after being severely damaged by shoes for one reason or another.  I am not hear to argue the pros and cons of shoeing, though most every equine podiatrist or farrier will agree that barefoot is better for the horse, but shoeing is a necessary evil in the performance horse.  I would like to quote Stephen E O’Grady in Veterinary Clinics of North America, Equine Practice, Vol 24, Number 1, April 2008, pg216-217.  “Although there are unquestionable benefits of keeping a horse barefoot, maintaining a performance horse so that its feet are in a condition to withstand the rigors of competition without becoming lame can be challenging.  … “ With the demands of management, ground surface, training, and competition schedules, it is invariably difficult to maintain the integrity and mass of the hoof to afford the necessary protection.  …. “ A happy medium can often be found (between barefoot and shoeing)wherein when the repetitive insidious overload placed on a high-level sport horse leads to a compromised hoof complex, removal of the shoes for a specified period allows many structures to restore and regrow to varying degrees.”

The above statements are generally accepted ideas and practice in performance horse management.  My premise is that the problems associated with shoeing certain dressage horses could be alleviated if hoofboots were allowed in dressage competition.  The horse would then have the best of both worlds:   barefoot when not working and hoof boots for protection when working.

An objection to legalizing hoofboots is that equine federations do not want to condone one vendor or type of boot to the exclusion of others.  Certainly, the equine federations have come to name certain vendors’ bits as being acceptable.  The vendor does not have to be named.  The specs of a boot can be specified as being legal.  There are some boots which are simple and light and would be suitable for dressage, and there are some which are clunky and large and would not be acceptable.  However, there are all types of shoes which are used on dressage horses, and none are designated as acceptable or not.

Hoof boots made possible because of the advance of technology are better for some horses than are other forms of hoof protection.  It would be progress in the advancement of equine husbandry to allow the use of hoofboots in dressage competition.

February 21, 2010.  Right front foot.There is still some bruising at the quarter, and the coronary band is pushed up at quarter,  but feet are beginning to look normal and horse is beginning to bear more weight on the heels, though he still appears to be trying to lift weight off the heels. 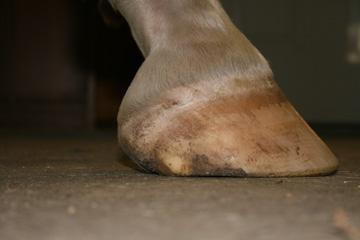 November 9, 2010.  Right front foot.  The foot is healthier, no bruising, coronary band is not deformed, toe is a little long, but horse’s balance and weight seem to fall between heel and toe, as it should be. Horse is sound. 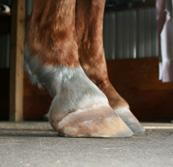 December 19, 2010.  Right front foot.  Toes are long, but ground is now frozen and hard, and I wanted to leave some protection around the foot by not taking off hoof wall at the toe.  The horse is sound, and after 4 years of working to get this horse sound, my gut simply says don’t take off toe at this time.

Now that the feet are sounder, the back is starting to swing again.

Throughout this blog, I used primarily only one foot to illustrate the problems that were affecting all four feet.  But since I have over 4000 photos documenting his saga, I thought putting in only a few photos of one foot would be adequate.  When I refer to foot, I mean feet.  There are a few photos of the hind feet, just to show that this was not a uniquely front foot problem. 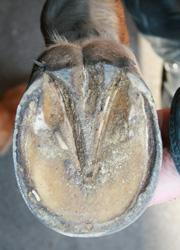 December 19, 2010.  Right front foot.  There is now a lot more wall evident than there was in previous photos.  It is even strong enough to remain raised beyond the sole.  There are bars, though still flimsy.  There is too much toe wall, and when the ground thaws some, I will remove that.  The frog no longer abscesses, but it is not as large as it was in earlier years.  I believe that all the infection and destruction within the foot which occurred when shoes were on this horse, caused scarring and atrophy of the dermal tissues which make the frog.  The heels are in the process of expanding again, but if the internal structures are scarred and atrophied, I do not know how much of a return to normal can occur.

I hope this ordeal I put Fabio through in an attempt to be legal in a show, was not in vain.  I hope someone important in the dressage world will see this blog series and legalize hoof boots for competition.