~~This is  Part XIX of my blog post on Hoofboots, Barefoot, and Horseshoes.  If you have not read the previous 18 posts, this one might not make sense.  So you might want to read the previous posts  in addition to reading this one.

Here it is, November 2011 and I was able to show Fabio in a USEF dressage competition once, because I was convinced by a farrier to try a different type of synthetic glue on shoe on him.

Now the definition of insanity is doing the same thing over and over again, in an attempt to get a different result.  I spent 5 years trying to rehab Fabio’s infected and destroyed feet.  I would work to get them better by allowing him to go barefoot  in the pasture and in the stall, while still needing to ride him in various types of boots.  Then, as the previous 18 blog posts  show, I would try to glue or nail some sort of shoe on him, so that I could show him, and his feet would break down again, effectively negating all rehabbing progress I had made.   So it should be obvious by now, that the only way to keep Fabio alive is to ride him in boots.   (No feet, no horse, and without boots in order to exercise him, Fabio would have no feet).

However, until the executives in the USDF realize that barefoot and boots are a means to preserving the health and soundness of the entire horse, then those of us with horses whose feet do not allow them to be shown barefoot or in easily removable shoes will continue to stupidly search for some sort of traditional type shoe to be affixed to our horses’ feet just so that we can compete in a horse show.

So I found another type of shoe for Fabio.  It was a synthetic, metal reinforced acrylic shoe that could be glued on.  Unlike a steel shoe, this synthetic shoe would flex and deform along with the horse’s foot in stance and in flight.  This shoe had even been used on racehorses.  Racehorses had won races in this shoe.  It was indeed a very nice shoe.  Trainers were so happy—Fabio could now be a normal horse, and look like all the other horses with shoes!  Fabio would be fine now, and could be shown!!   Below is a picture of Fabio in the shoe. 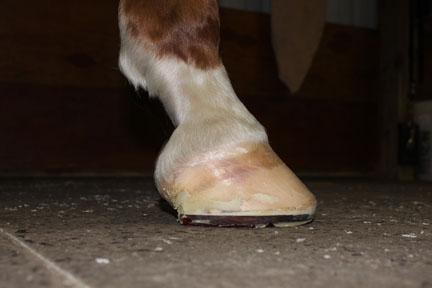 I put the shoes on two days before the show.   On the day of the show, one shoe came loose on one side.  I was able to put glue between hoof and shoe.  Fabio showed.  Three days later, in the pasture, two shoes came off.

The cost of the shoes and the cost to glue them on was not small.  They lasted a week.  Several hundred dollars were spent to glue on 4 special shoes which did not last a week.
But that was not the only problem.  In one week, bacteria had invaded the hoof wall under the glue.  White line disease was starting again in Fabio’s hooves.
But wait!  That was not the only other problem!  The glue had eaten into the outer wall layer of Fabio’s hooves.  Once again, the wall started peeling away from the foot.  This happened in only one week!
But wait!  That was not the only other  additional problem.  The shoes , as light and flexible as they were, caused peripheral loading of the hoof which resulted in too high pressures within his feet, and tearing of vascular structures occurred, as evidenced by the bruising which was easily seen in the white feet. 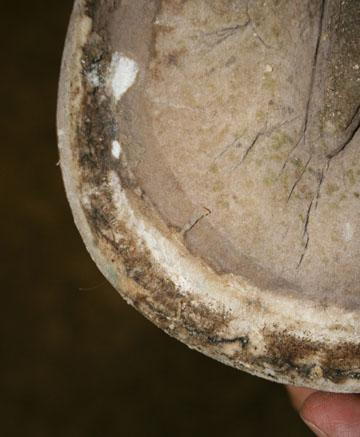 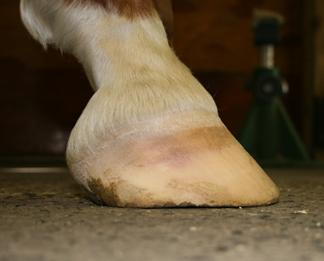